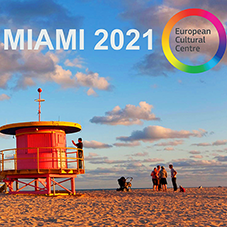 With the arrival of Art Basel Miami in 2002 the city has been placed as a fixture in the art circuit. Miami has since experienced an extensive boom of high-rise architecture. This boom transformed downtown Miami, and now boasts one of the most impressive skylines in the United States, ranked just behind New York City and Chicago.
Miami Beach, located just a few miles away from downtown Miami, has quickly become one of America's most famous beach resorts. Its Art Deco District is the largest collection of Art Deco architecture in the world and comprises hundreds of hotels, apartments and other structures.

The Miami Center for Architecture & Design (MCAD) in downtown Miami and Florida International University (FIU) - Miami Beach Urban Studios, are two premier locations to exhibit architecture & design in the greater Miami area. Our 3-month exhibition coincides with the famous Miami Art Week and will attract a diverse audience of professionals and cultural enthusiasts from all around the world. There isn’t a better place to present your work to the right audience and professional contacts in Florida, than the Miami Center for Architecture & Design and Florida International University Miami Beach Urban Studios. Due to the importance of the exhibition venues, the exhibition will be very well noticed by American and international professionals, as well as the media.

The European Cultural Centre-USA is a Non-Profit organization that aims to heighten the awareness of philosophical themes in contemporary art, architecture, and design and introduces the concept of TIME SPACE EXISTENCE to a broader international audience.

By bringing together a diverse group of participants working across disciplines, the European Cultural Centre aims at stimulating an exchange among architects, universities, legendary masters, emerging studios, established global practices, designers, artists, photographers, developers, engineering companies, who together can have a crucial role in shaping the future of our living.

In addition, the European Cultural Centre presents the TIME SPACE EXISTENCE series,  a special collection of video interviews featuring masters in architecture. Ricardo Bofill, Balkrishna Doshi, Bjarke Ingels, Odile Decq, Toshiko Mori, and many others will explore the fundamental topics of time, space and existence through their personal and professional perspectives.

Photographs from Denise Scott Brown marking the architect, planner, and theorist’s first solo exhibition in the U.K. Titled Denise Scott Brown: Wayward Eye, the exhibition features photos taken between 1956 and 1966 that illustrate Scott Brown’s explorations into urbanism, Pop Art, and the emerging architectural language of roadside America, ideas which would later be collected in Learning from Las Vegas published in 1972.

“Such a study will help to define a new type of urban form emerging in American and Europe, radically different from that we have known; one that we have been ill-equipped to deal with and that, from ignorance, we define today as urban sprawl,” Scott Brown wrote in 1977.

The photos provide insight into how Scott Brown, Venturi Izenour, and their students dissected commercial strips. Never before had such mundane elements been looked at through an architectural lens: a nondescript shot of a Dodge Charger driving down an L.A. freeway is deliciously titled Industrial Romanticism.